Once wet Floodlock blocks water instantly - helping save you, your loved ones,

and all you treasure from devastating surface floodwater damage & disruption, with very low environmental impact.

Your basket is empty.

Sandbags are bags filled with dirt, it can be sand or in fact any other earth. The idea is very basic, fill a strong plastic or canvas sack with something heavy and even, so not rocks for example, that can be used as bricks to build a wall.

Sand bags have a role. They are great for holding things down, like sign posts warning of a flood. Not quite so easy for the emergency services or the general public to use as described in this video from Oxfordshire County Council and Oxfordshire Fire & Rescue Service, especially if you are working on your own. 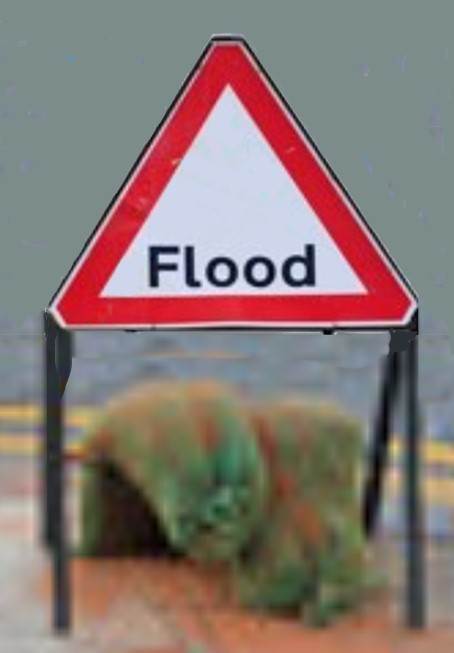 As far as domestic and small business flood damage mitigation is concerned, sandbags have serious limitations.

After the serious summer 2007 Floods a result of which 13 people dies and 44,600 homws were flooded so badly that 1 year later people were still in temporary accomodation the UK government commissions Sir Michal Pitt to review flooding and how we could be better protected.

Copied directly from the Pitt Review Executive Summary "ES.49 ‘Strategic sandbagging’ can be successfully used alongside roads or adjacent to important buildings to prevent them from flooding, but the work needs to be done properly by experts. The Review was unable to obtain any significant evidence that sandbags were particularly effective during the 2007 summer floods in providing protection to individual households. ES.50 Nevertheless, sandbags are still widely regarded as an important focus for community action and they should not simply be withdrawn. The general provision of sandbags should be phased out in favour of better products such as kite-marked fl ood boards, air brick covers and other forms of temporary defence".

Sandbags are porous, so water works through the grains of sand which then act more like a sieve than a flood barrier on their own. That is why you see them used in front of doors with a plastic sheet.

On the plus side in the UK the government and councils have been known to give them away for free in times of well publicised disaster, but you usually need to collect and fill them yourself from a local depot. You may just have to move the 150kg from say the curb to the front door, but chances are you have to move that much into the sandbags first, then you have to bring them home – so you need to lift them and put them into your car or van… then you need to position them making sure you use the sheet well so the flood water does not just flow through gaps in the wall or between the grains of sand.

You can buy filled sandbags delivered to your home on line, 10 can cost 4 times as much as Flood Traps to build the sand bag height of flood barrier, upto 0.5m or 20".

Inflatable "sand less" sandbags can be washed away with the flood current, to create an unexpected and unwanted barrier further downstream which may force flood water to flood other properties and damage other areas.

Once the floods have gone the flood sacks wet with putried contaminated water fill the air with a stench like raw sewage or dead fish and they have to be collected for disposal.

Here’s how they compare to Floodlock Flood Traps.

while Flood Traps are:

♦ Virtually effortless to lay, a child or a healthy octagenarian could do it.
♦ Ready to protect your home against flood damage in 35 seconds
♦ Just 120g or ¼ lb in weight per pack
♦ Packed in a box a little smaller than a sheet of A5 paper, 20cm x 12cm x 4.5cm to be more precise., so they are easy to store in a draw.
♦ 3-4kg once wet
♦ Disposable as household waste
♦ Do not spoil or go off, so remain ready for use while dry for years.
♦ Able to reduce contaminated flood water flow through gaps around a door to a manageable trickle. Outstanding and much bettter than other similarly affordable alternative the Scottish Flood Forum's Operations Director has seen over many years in the field helping people prepare for and clean up after floods.
I hope you can see now why traditional sandbags are being replaced with inflatable ones, but they face another problems.
Weighed down by the water inflatable sandbags are prone to float away with fast flowing flood water to create an unplanned barrier down stream that in turn could inadvertently redirect the flood water to cause costly subsequential damage elsewhere. Not clear who would be liable for the damage in this scenario.

By the time you get enough inflateable sandbags, sausages, worms, dams, sacks, snakes or the like to build a 0.5m high barrier in front of your door you will have spent a lot more cash and time than the pack of Flood Traps you need to boost your robust door's seal by 0.5m (20") or more and the results will be much less relaible. Sinceyou clamp Flood Traps inbetween your door or window and its frame they cannot break loose, until you open the door of course, after the flood waters have drained away.
Display per page
Sort by
Browse Product Pages
*